The cannabis plant is known for the myriad benefits it holds in the form of it’s various cannabinoids. While there are two abundant (or major) cannabinoids, CBD and THC, the over 100 known minor cannabinoids each have their own unique effects and benefits. Today we’re diving in to learn more about a  minor cannabinoid gaining attention for its array of benefits, CBG!

Short for Cannabigerol, CBG is known as the mother of all cannabinoids, despite its minimum concentration in the cannabis plant. Its acidic (or raw) form, CBGA, is the first cannabinoid that forms during the plant’s growth.

While the concentration of primary cannabinoids THC and CBD often falls anywhere between 15-30%, CBG typically occurs at much lower potencies. Anything that tests at over 1% CBG is considered a strain or cultivar rich in that cannabinoid!

Products rich in CBG may sometimes be more expensive due to its negligible quantity in the cannabis plant; however, it is becoming much more popular and more accessible.

What are the Benefits of CBG?

All cannabinoids interact with the Endocannabinoid System to help keep the body in a state of homeostasis. CBG is non-intoxicating, meaning it doesn’t produce a high like THC, and research suggests the compound has the following therapeutic benefits:

In addition to these common illnesses, CBG has shown the potential to play a role in:

Does CBG Help With Anxiety?

Relieving anxiety is one of the most prevalent potential benefits of CBG. While several cannabinoids have been shown to help reduce stress and anxiety, CBG works in a similar way to CBD to relieve anxiousness without intoxication. Cannabigerol can also help to promote better sleep and life quality through this mechanism.

Does CBG Make you Feel Sleepy?

The effect of CBG on sleep varies depending on the amount being consumed. CBG has energizing effects for most consumers, and it can help clear the mind and help boost focus and productivity without causing unnecessary sleepiness. However, its stress-relieving properties may assist with relaxation which can help those who struggle with falling asleep to rest more easily.

How Long Do CBG’s Effects Last?

Not everyone gains the same sort of effects from CBG. How long the cannabinoid does last in the body depends on how it interacts with your unique metabolism and Endocannabinoid System. However, CBG’s effects generally last for about 2-6 hours!

How Does CBG Make You Feel?

If you want to feel relaxed, pain-free, and at peace, CBG just may be what you are looking for! It tends to make most consumers feel motivated and happy, making you ready for daily-life tasks with better focus and mental clarity.

Thankfully, the current popularity of CBG has resulted in more research being conducted on the cannabinoid. This incredible compound offers entourage effects when used in tandem with other major cannabinoids, thus increasing their effectiveness and making them beneficial for so many! This is why at both Passion Flower, we made sure to include CBG in some of our products too! In fact, we have a full line of CBG-infused full-gram ceramic vape cartridges made available through your local dispensary! 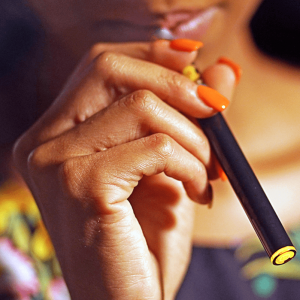 Looking To Give CBG Vape Cartridges A Try? Check Out The Selection Of Strains By Passion Flower Cannabis