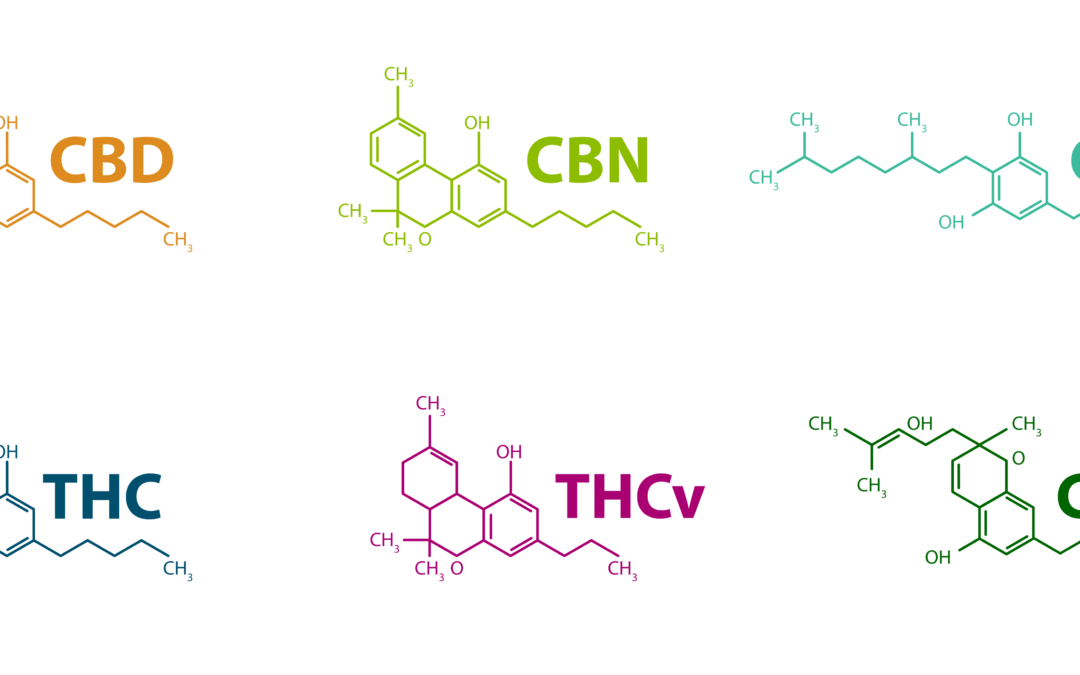 The endocannabinoid system is comprised of a network of receptors and chemicals that help to regulate various functions in the body, including pain, inflammation, mood, and appetite. When phytocannabinoids bind to these receptors, they can affect the body. This is why different cannabinoids can affect people in different ways. It is thought that many of the therapeutic benefits of cannabis result from its ability to interact with this system.

There are hundreds of cannabinoids, but a few are definitely more well-known than others. Let’s dive in!

THC is the main cannabinoid responsible for the plant’s intoxicating effects. It binds to cannabinoid receptors in the brain and produces a “high” or feeling of euphoria. THC has also been shown to have some therapeutic benefits, including pain relief and improved appetite. However, it may cause adverse side effects in some consumers, such as anxiety or paranoia.

CBD is the second most well-known cannabinoid, and it does not produce an intoxicating effect. In fact, CBD can counteract the intoxicating effects of THC. Research indicates that CBD has various potential therapeutic benefits, including reducing inflammation, relieving pain, and improving mental health.

CBN is an oxidized version of THC, meaning it forms when the compound has been exposed to air over time. While CBN does not produce the same kind of high as THC, it is often used as a sleep aid and has shown potential pain-relieving benefits.

Some other known therapeutic uses of CBN  include:

CBG is a cannabinoid that is thought to have various therapeutic benefits – you can learn more about it in our CBG deep dive blog! This compound is non-intoxicating and has been shown to interact with receptors in the endocannabinoid system to help regulate things like inflammation, pain, mood, sleep, and appetite.

CBC is another cannabinoid that is shown to have many therapeutic effects. It’s quite similar to CBG: it’s also non-intoxicating, and it has been shown to interact with receptors in the endocannabinoid system to help maintain homeostasis in the body.

How Are Cannabinoids Extracted?

The majority of cannabinoids are extracted from the cannabis plant using a process known as solvent extraction. This involves using different solvents, such as CO2, butane, or ethanol, to separate the desired compounds from the cannabis plant material. The resulting extract can then be further refined to isolate specific cannabinoids or be used in its complete form for health benefits.

Cannabinoids can also be extracted using other methods, such as through ice, steam distillation, or supercritical fluid extraction. These methods are typically used for essential oils, and they are not used as commonly for extracting cannabinoids.

How Cannabinoids are Used to Treat Medical Conditions

Regardless of how they are administered, cannabinoids may help to relieve the symptoms of many different medical conditions. If you are interested in trying cannabinoids to treat a condition, be sure to speak to a doctor or naturopathic healthcare professional first to ensure that it is safe for you to do so.

Potential Risks and Side Effects of Cannabinoid Use

Like any other medication, cannabinoids can cause side effects in some people. The most common side effects include mild dizziness, drowsiness, dry mouth, and nausea. More severe side effects are rare but can include anxiety, paranoia, and psychosis.

The Future of Cannabinoid Research and Treatment

The future of phytocannabinoid research is promising, as these compounds show great potential in treating a variety of different medical conditions. In particular, cannabinoids are being studied for their ability to treat pain, inflammation, anxiety, and seizures. Additionally, researchers are exploring the possibility that cannabinoids may be helpful in the treatment of cancer.

However, there is still a lot that we do not know about cannabinoids, and much more research is needed to understand the risks and benefits of these compounds fully. It is important to remain optimistic while also remaining cautious as more research emerges in this exciting area of medical science.

To put it simply, cannabinoids help to regulate how cells communicate within the body – how they send, receive, or process messages by working with our bodies’ endocannabinoid system. However, it’s important to note that the effects these cannabinoids can have on you and your body, can be starkly different from one another and can even vary highly from one person to another. With over 100 cannabinoids having been identified in cannabis, THC and CBD are the two most commonly found. Cannabinoids are thought to have therapeutic effects, and they are being studied for their potential ability to treat a variety of conditions, including chronic pain, inflammation, anxiety, and sleep disorders.

*The FDA and DOH have not approved cannabis to treat, cure, or prevent any disease or illness.